White elephants, monster marrows – the village fete has a formula that seldom varies. But it’s quintessential to the British summer. 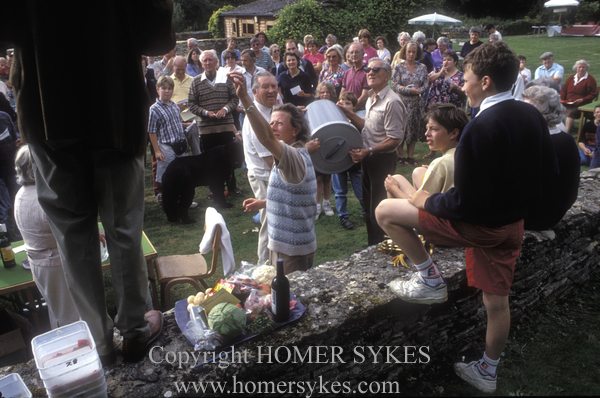 A quarter of a century ago Eastleach Turville villagers either owned or had jobs on the land; they owned their houses or lived in tied cottages. Today many have been forced to seek work away from the village and, because only a handful of council houses have been built, many people have had to move out.

Their places have been taken to some extent by comfortably off newcomers who have either retired to Eastleach Turville or who use it as a commuting base. Even this influx is slow, however, because only one new house has been built since the second world war. Incomers have to wait for houses to become vacant.

Unusually, perhaps, there is no undercurrent of enmity between old-timers and newcomers.

“People move here because they love the village and respect the Villagers,” says Trish Haynes, a parish council member born in Eastleach.

“They don’t try to change it because they don’t want it changed, None of us wants it changed.”

The solidarity manifests itself in actions. Last May flash floods brought chaos to the village. Every able-bodied villager was out immediately with brushes, buckets and wellies to help those less able. They needed no asking,

Village fetes are fun, but they have a serious purpose – raising money for the community, which in Eastleach Turville means for St Andrew’s Church and the village hall. The church needs funding because parishiners have to raise £5,000 a year towards costs in the Gloucestershire diocese, a considerable sum for a village with just 286 on its voting register.

The village hall costs about £200 a year to run. It is home to the village playgroup, the Friendship circle for onver-60s, the gardening club, local shows and meetings and, one morning a week, to the mobile post office.