Church of St Andrew – A Grade I Listed Building in Eastleach Martin, Gloucestershire

An apocryphal tale suggests that the churches were built by two sisters who argued, and each put up their own church. Unfortunately, the truth is less dramatic. The estates of Eastleach Martin and Eastleach Turville were always separate, and each church was built by the lord of the manor for use by his family and retainers.

The most striking exterior feature of Eastleach church is the saddleback west tower, built in the late 13th or early 14th century, with finely shaped windows. In the churchyard is the base of a medieval cross.

You enter St Andrews through a Norman doorway, built about 1130. Over the door is a wonderfully carved tympanum, depicting Christ in Majesty, flanked by adoring angels. The figures of Christ and the angels are worn (or defaced) but the surrounding chevron and traditional Norman carving motifs are clear and crisp. The overall effect is quite wonderful.

Look closely at the carved lectern, at the east end of the nave. It came from Tewkesbury Abbey and was for some years used by a local parishioner as a parrot stand. When the bird died, she restored to use as a lectern in the church. The Jacobean pulpit has carved panels that once served as garden seats.

Near the lectern is a large parish chest, probably dating to 1632. The font is a rather plain octagonal style, dating to the 15th century. The organ partly hides a 14th-century tomb recess in the transept, decorated with ballflower carvings under a cusped canopy.

The most famous curate of Eastleach Turville was John Keble, the Victorian church reformer who helped inspire the Oxford Movement. The clapper bridge across the Leach is named in honour of Keble. For more on this influential Victorian, read a short biography in our article on Eastleach Martin church.

Blocked pointed archway on north side of chancel (formerly leading to chapel) has one jamb with 2 attached shafts preserved under small lean-to hood; one shaft has crocket capital, carved grotesque head to keeled shaft.

Gothic memorial above tower doorway to Benjamin Boyes, died 1814, by Harvey of Fairford.

The following Gallery of lovely photos is by Freddie Pymer

The church of ST. ANDREW, which bore that dedication by 1282, is built of limestone rubble with ashlar dressings and comprises chancel, nave with north transept and south porch, and west tower.

The south wall of the nave is of the mid 12th century and the south doorway has two decorated orders and a carved tympanum. The chancel arch, though partly renewed c. 1884, is of the late 12th century, as is the north wall of the chancel; a blocked arch of two orders in the wall presumably opened into the chapel of Holy Trinity recorded in 1506.

In the earlier 14th century the north transept, which formed an extension to the easternmost bay of the aisle, was added, and a window with flowing tracery in the south wall of the nave is of the same period.

The removal of the north aisle and the chancel chapel was possibly carried out in the 17th century; the transept walls were extended to meet the easternmost bay of the aisle arcade and the two other bays were blocked and given plain lights with a single mullion.

The north and south walls of the chancel may have been altered at that time and repairs to the chancel were carried out in 1776 when the roof had apparently collapsed.

In 1825 the east and west walls of the transept were rebuilt, the old lights being reset.

A window in the transept formerly depicted John of Leach, a priest, and a 14th-century tomb in its north wall had an effigy, perhaps also of one of the Leach family; both glass and effigy had been removed by the 1780s.

A reading desk dated 1632 and some old panels, built into the present pulpit, may have once formed part of an old 3-decker pulpit. Some of the pews also have old woodwork, probably from the earlier box-pews.

The parish chest of 1678 survives. The carved shaft to the lectern came from Tewkesbury Abbey. The two bells were recast by John Rudhall in 1789.

The plate includes a bellshaped chalice of 1733. In the churchyard is the base of a stone cross. The registers survive only from 1654 and the volume for 1748–79 has been lost

The following Gallery of wonderful photos is by Andy Hill 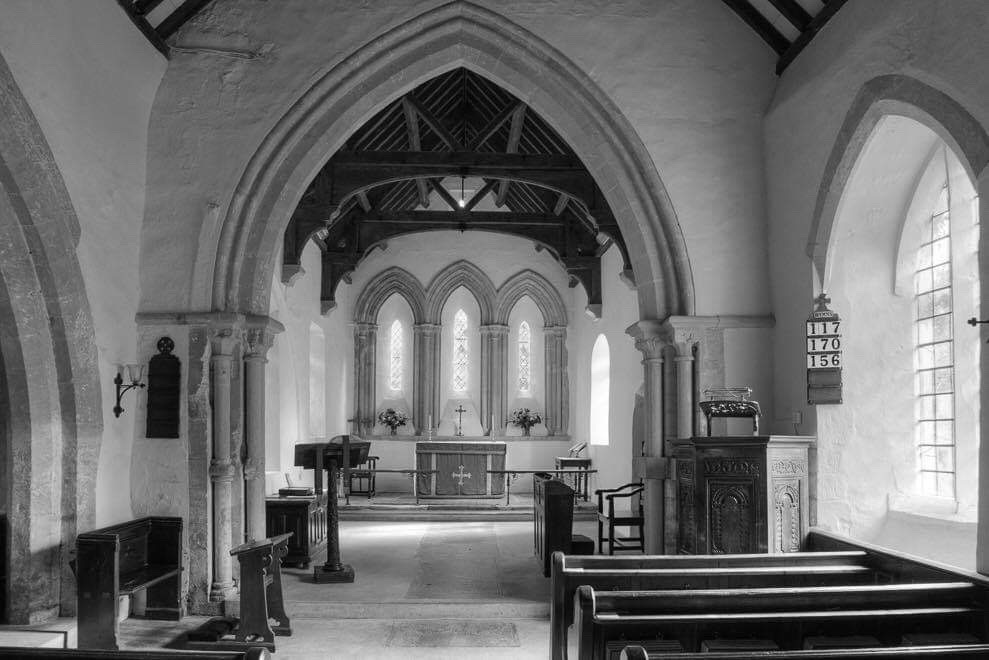 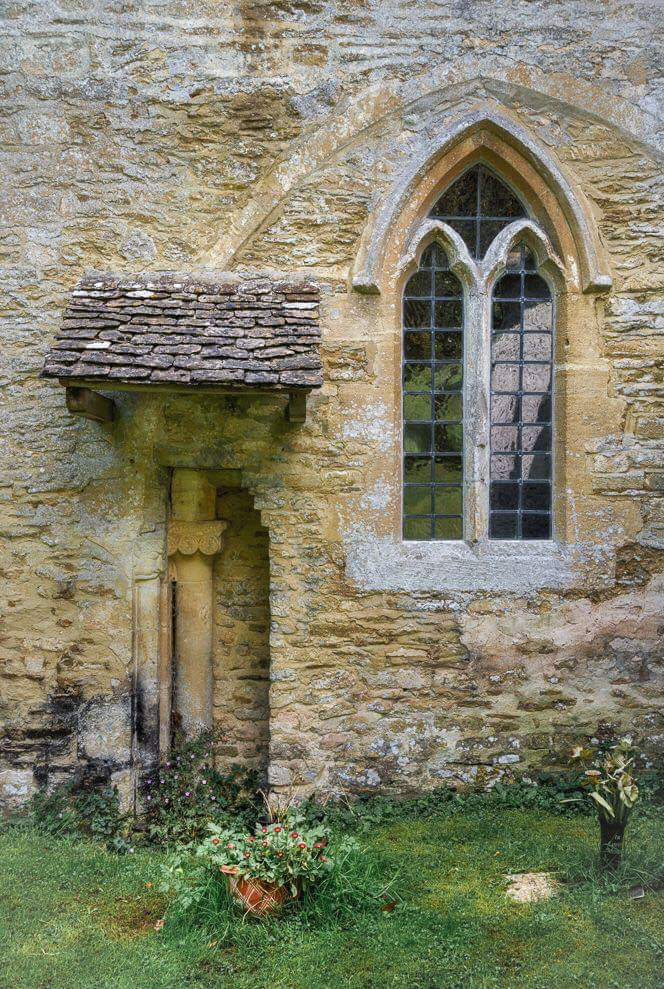 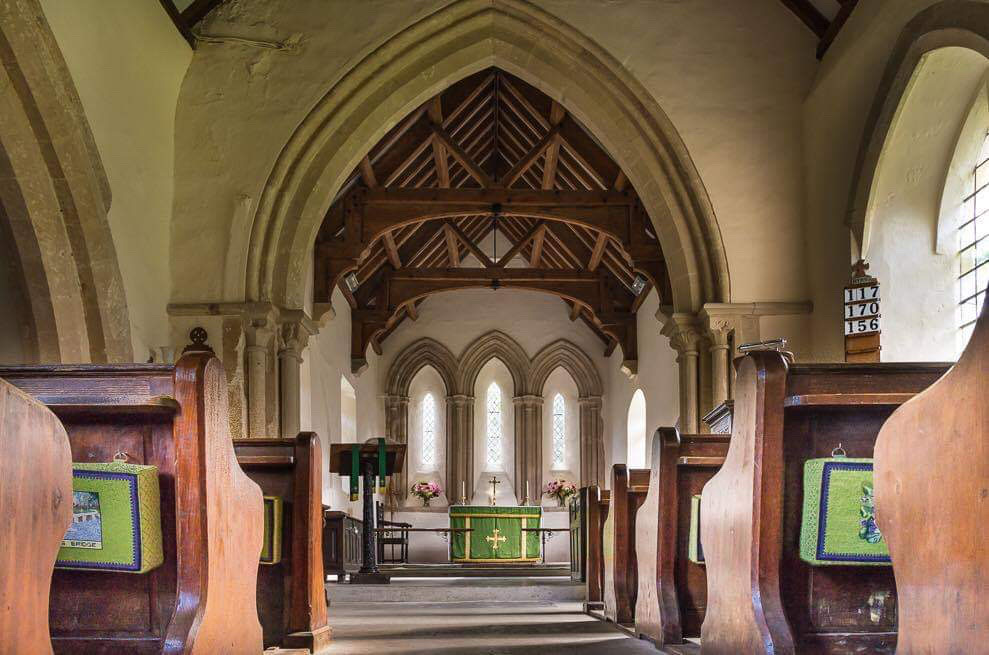 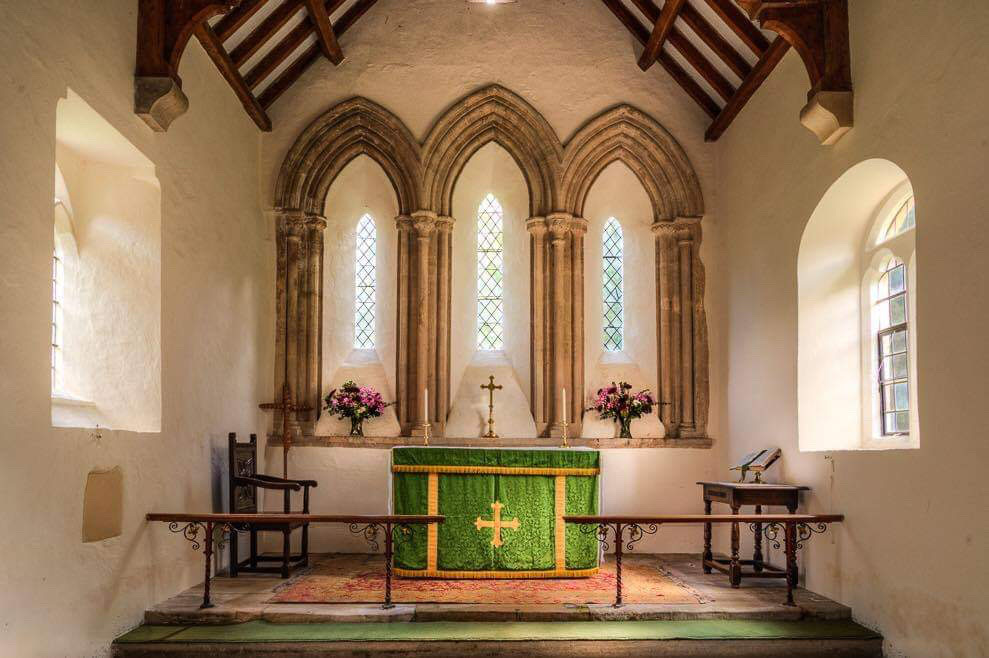 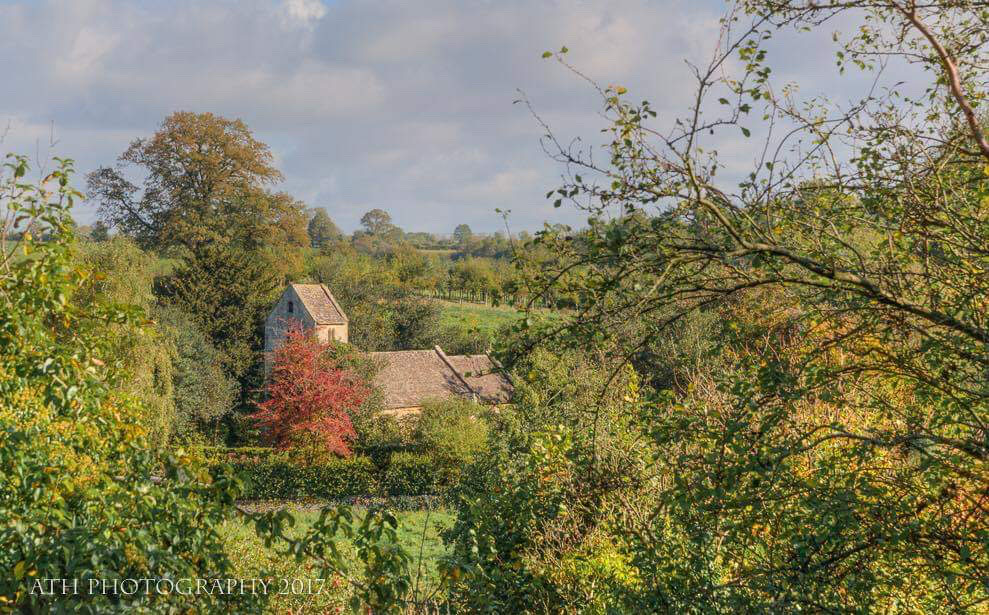 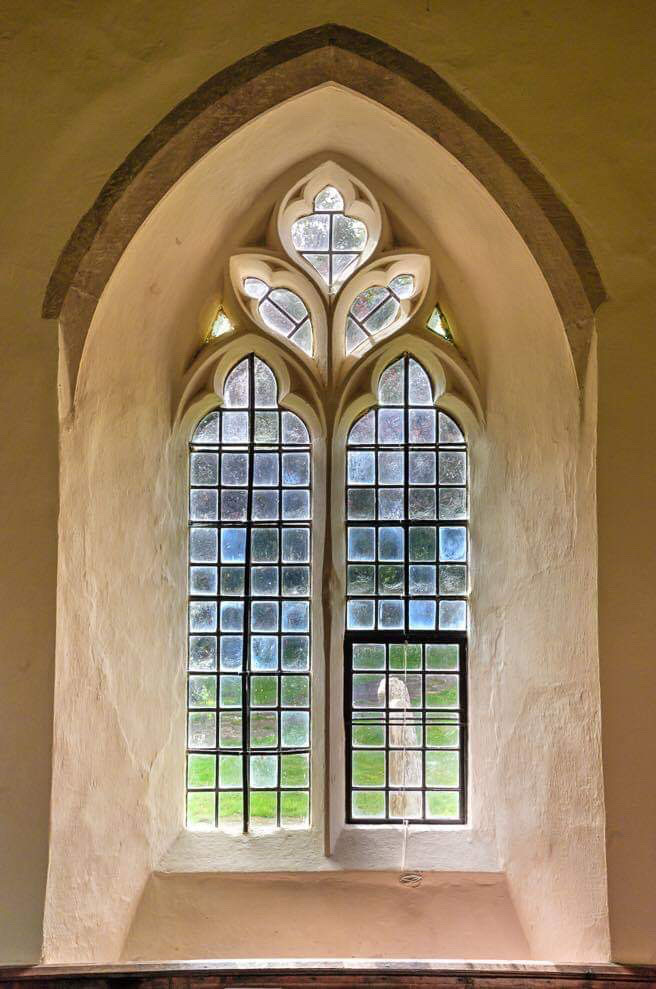 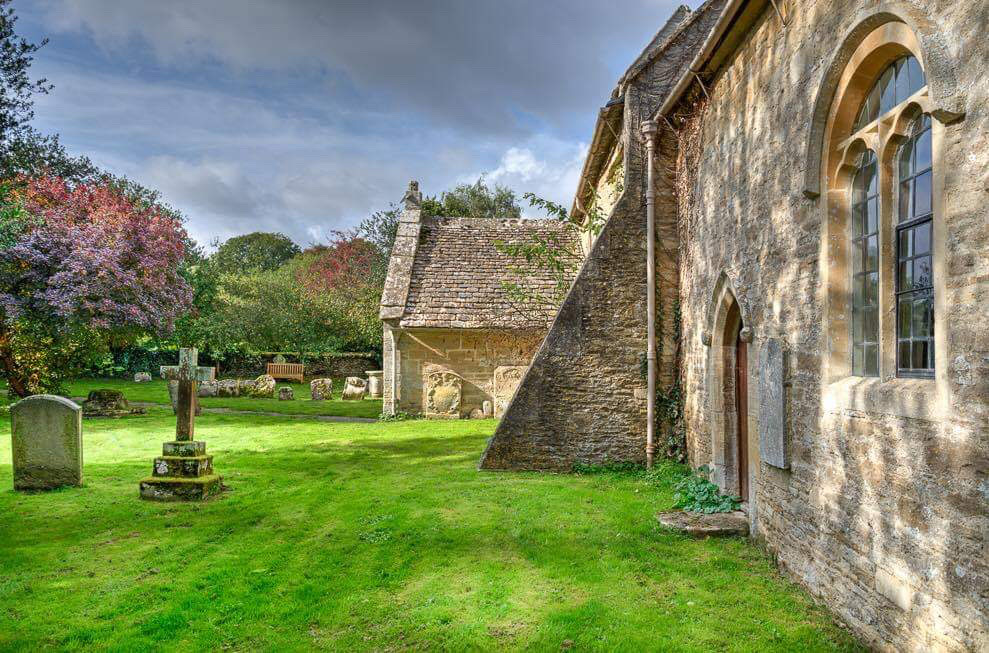 If you have any images of the Church of St Andrew please send them to steveandvince@outlookh.com 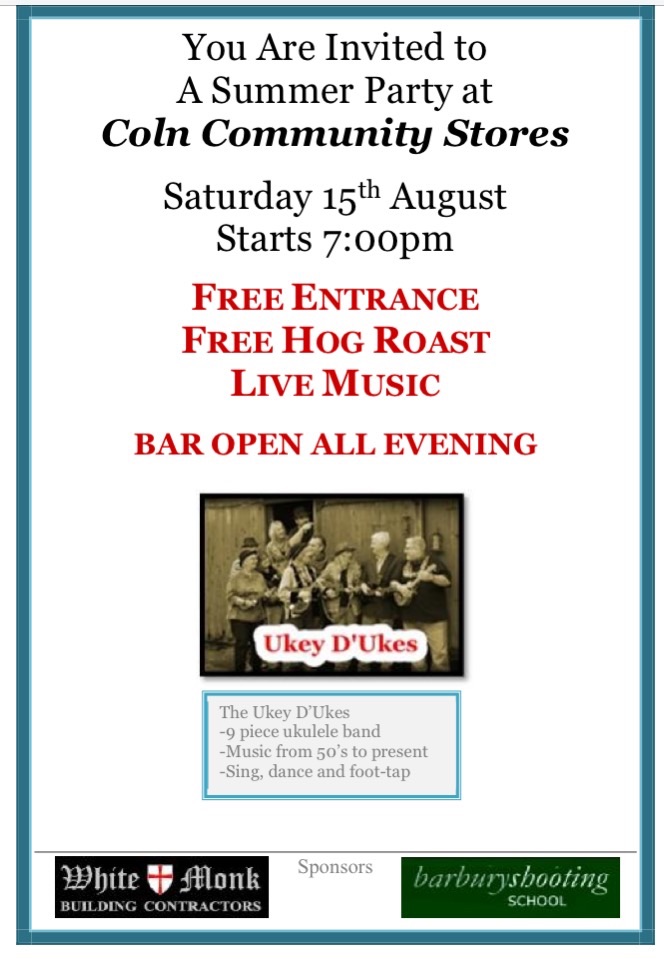 You are invited to a SUMMER PARTY at COLN COMMUNITY STORES on Saturday 15th. August from 7.00 pm. 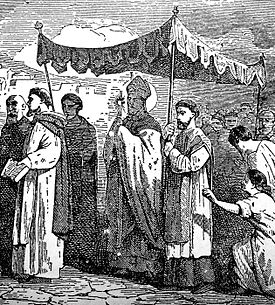 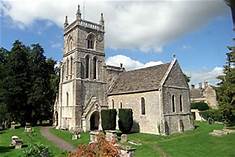 Coln Church Choir will be holding their Summer Concert on Saturday 2nd. June. A change of venue this year, by kind permission […] 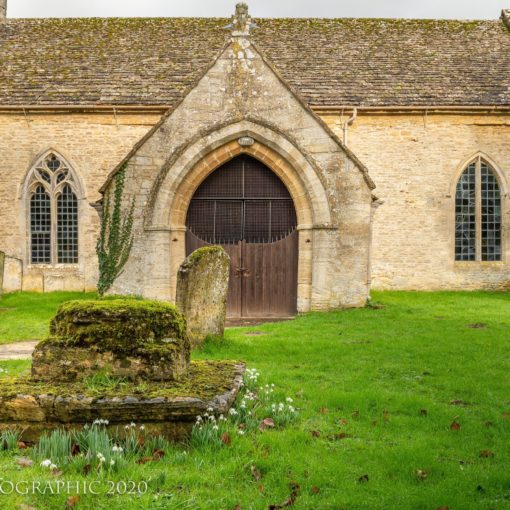 The PCC have decided to trial a morning service on Sunday 6th September 2020 at 11am.
Restrictions remain in respect of holding services in church, including the numbers allowed
to be restricted to 30 persons, details of all those attending to be recorded for track-andtrace purposes, social distancing to be preserved, face coverings to be worn, no singing and
the service to be as short as practicable.